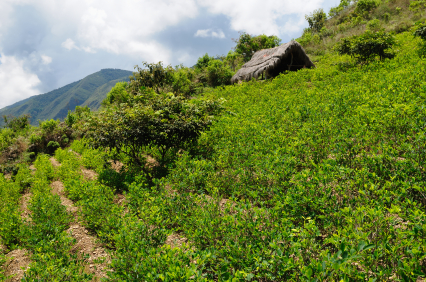 Cocaine dependence aetiology is complex and genetically influenced. We hypothesize that, for many users, efficient metabolism of cocaine and its toxic byproducts aids persistent cocaine use, such as that leading to dependence. The glutathione-S-transferases - in particular, GST-Pi - may be important in preventing cocaine and alcohol-induced oxidative damage. We genotyped a GST-Pi functional polymorphism (Ile105Val) in 654 male cocaine users and 572 controls from Brazil. Genotype and allele frequencies of Ile105Val differed significantly (chi = 6.74; P=0.03 and chi = 6.54; P = 0.01, respectively). Ile/Ile cocaine dependents had an OR = 1.31 (95%CI: 1.04-1.65), and Ile/Ile dependents consuming >50 units alcohol weekly an OR of 1.44 (95% CI:1.06-1.96). Population stratification was assessed and did not affect the results. These data require replication but do suggest that the high activity Ile105 GST-Pi allele may influence the aetiology and development of cocaine dependence